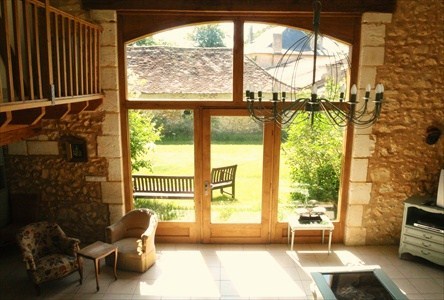 (see also The Cottage below)

In October 2007 the only occupants were mice and rabbits, but 8 months later it had been transformed and we welcomed our first guests. Gone was the wood store, the chicken coups, the tobacco drying racks, the mangers for the cows and various pieces of antiquated farm machinery. Where the chickens used to roost we now have a mosaic wet room, where the cows used to dine is the kitchen and sàlle a manger, large enough to cater for 16 or more. Where I used to park my trailer is the salon with its wonderful collection of Antique French armchairs and sofas. Here we have the television with its obligatory Skybox so CBeebies and the BBC News are still at your fingertips.

There is a mezzanine with a large L shaped sofa, an ideal spot to relax and stare at the frames and original beams, or even read should you choose. There are two doubles with magnificent beds and two other bedrooms each with two singles, one of which is large enough to fit in a third single bed. There is a large cast iron bath in the salle de bains where you can soak away your aches and pains. Alternatively you can hose down all the kids en masse in the walk-in wetroom, great for rinsing off after splashing in the pool.

In the downstairs snug where previously some of the rabbits used to have their interior warren we have installed a WiFi access point so you can still pick up the emails and both you and your children can surf to your heart's content.

On a practical note the U shaped kitchen is very well equipped with an American style fridge freezer, a wine fridge to ensure you never run out of beautifully chilled rose and biere, a dishwasher, a 90cm SMEG oven and gas cooker, a microwave oven and a wide selection of pots and pans ideally suited for French cuisine. Mornings are aided by the expresso machine and Dualit toaster. We like to think that every kitchen utensil is available, from your essential corkscrew to your oyster shucker. Let us know if we have missed something out.

Outside there is a secluded decked area with table and chairs where you can knock up a barbecue and stare at the stars. 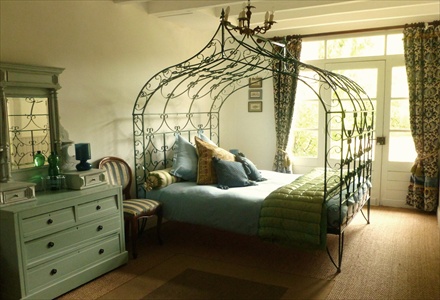 This originally housed the cook/housekeeper, her husband the farmhand/handy man and their children. Now it welcomes four to six guests. The kitchen/breakfast room is traditional in style with terracotta tiles and a wood burner in the hearth. It has the essentials for holidaying with the fridge freezer, gas cooker, microwave and a selection of Le Creuset pots and pans. The antique wooden table easily accommodates six people.

The bedrooms are two in number. One has two singles and is airy and bright whilst the double has a unique double bed the likes of which you will never have seen before.

The bathroom is also unique and can accommodate a family of four without too much difficulty. Some have said it's a little like a rugby club bath alternatively it could be regarded as Turkish in design. However if showers are your thing it has one of those too.

The lounge has a sofa bed, which can sleep two and hosts the television and Skybox so English telly is still there if you need it, along with the WIFI point. There is a selection of DVDs and books to help care for your children if appropriate.

Outside is a pub bench for eating en plein air with a parasol if it gets too hot, surrounded by lavender. Opposite in the lean-to we keep the BBQ.